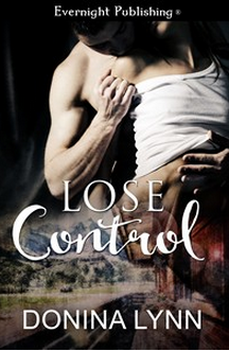 Myles Oliver Dayton likes control in every aspect of his life. He desires it, demands it in the board room and his bedroom. But when his teenage crush walks into his office to be his temporary assistant, the tight restraint he kept on his emotions starts to come undone. Something he couldn’t allow. His idea of love is demanding and possessive, and in the end there would only be pain—for both of them.

Cassie Sorrelson grabs onto opportunities when they come along and assisting Myles with all his demands is an opportunity she isn’t about to pass up. Sexy and controlling, he has her breathing hard and soon yearning for more than a few days together at the corporate retreat. When he suddenly pulls back, though, and refuses the desire she knows is running hot within him, Cassie is going to have to work at getting what she wants … making Myles lose control.

Myles closed his eyes and took a long, steadying breath. Cassie begging him, pleading with him to take her was playing havoc with the restraint he prided himself in. He never lost control. In fact, he did what was necessary to make sure he never even came close. This sudden willingness to loosen the tight hold he held himself in check with was a temptation he shouldn’t even be considering. Taking another breath, he buried the feeling as quickly as it surfaced and leaned back to face her. “I haven’t begun to punish you. Turn around.”

When she turned, he placed his hand between her shoulder blades and gently pushed. “Bend over, hold on to the handles of the chair, and spread your legs.”

Myles clenched and unclenched his fists while he watched Cassie’s long hair cascade across her shoulders and fall around her face as the line of her back drifted lower and her firm ass rose. The picture she created before him—vulnerable, exposed, and so unbelievably fucking sexy—had him strung tight and ready to break. But when his eyes finally registered the thin piece of material that didn’t even come close to covering where the globes of her ass met, he felt himself snap.

She wore that to the beach? That wasn’t a bathing suit. The damn thing was barely a step above a thong, exposing every inch of soft, white skin on her perfectly rounded backside. Myles didn’t have to think hard to imagine the effect it would have on every man she sashayed past. Possessive jealousy rippled through him at the thought of other men drooling over her and being able to get a glimpse of what he was seeing right now. Mine. The word shouted in his head as a fierce need to stake his claim overtook him. It wasn’t about staying in control anymore. It was about him showing her she fucking belonged to him. And by the time he was done, she was going to know just that.

Myles hooked his finger under the flimsy piece of material and ripped it in two.

Cassie’s head flew around. “Hey. What the hell do you—”

A warning rumbled low in his chest, cutting off her words. “What am I doing, Cassie? Is that what you want to know? You disobeyed me. What do you think is going to happen next?” Myles placed himself at an angle, wrapping one arm around her abdomen to support and keep her still as his other hand came to rest on her ass. “You’re going to remember who commands this body. I’m going to fucking make sure of it.”

Wide, shocked eyes looked back at him. “You wouldn’t.” 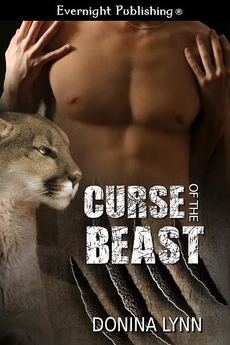 All of his life, Grayson Blackpaw lived by the rules of the half-breeds. He heeded the warnings and fought to keep the animal within under control, only to have his father murdered by the very thing his kind could never harm. Even if it means cursing himself to spend the rest of his days as a beast, Grayson was going to find the human responsible and make them pay—with their life.

Shapeshifters exist. Summer Jenkins wouldn’t have believed it herself, if she hadn’t watched a cougar change into a man before her very eyes. It doesn’t hurt when the man is as delectable as Grayson, either. Utterly droolworthy, Grayson sends her pulse racing and her heart falling...fast. But when Grayson admits that he’s willing to give up everything for the sake of revenge, will love be enough or can nothing stop the curse of the beast?

Summer inched over on the couch until her knees brushed against his, and she placed her hand on his thigh. It was a simple gesture of reassurance but the heat of her hand seeped through the denim, branding his skin and shooting higher. Desire flooded his veins and Summer’s breathing hitched when she felt it course through him. “He wasn’t the only one to touch me in some way, Grayson.”

Beginning to slowly make her way up his inner leg, Grayson grabbed her wrist before she closed what little distance there was left. If she made it to her destination, he wouldn’t be able to stop himself. He was already growing rigid in mere anticipation of her touching his length. If she actually made contact, he would lose what little restraint he held on to.

“Summer. I would like nothing more than to pull that dress up, plunge deep inside and take you over and over again, letting you know exactly how much I want you. But, we can’t. I won’t take the chance of hurting you.”

“You’re not going to hurt me. Worrying that you will is enough for me to know that you won’t.”

“You can’t know that because even I don’t. Summer, you need to understand there’s a chance I will do exactly that.” Grayson shook his head and took a breath. He wasn’t sure he could explain the constant battle of wills that had been waging inside of him for as long as he could remember, or how he’d been losing, but he needed to try. It wasn’t him just being overly cautious, there was a real danger. If he lost what little hold he had on the cougar while he was with her, he didn’t know what would or could happen. Grayson didn’t even want to think of the possibilities. “The lure of our animal halves is strong. The more we give in to them, the stronger they become. The stronger they become, the more we give in to them. Without something to stop the progression, the animal and its instincts become the predominant half and slowly overpower the human’s ability to remain in control.”

“So the worst that can happen is you shift into the cougar. I can handle…”

Grayson shook his head to cut her off. That damn stubbornness of hers was more than a little frustrating. “No Summer, you can’t. The worst that can happen is not the cougar. It’s the beast.” 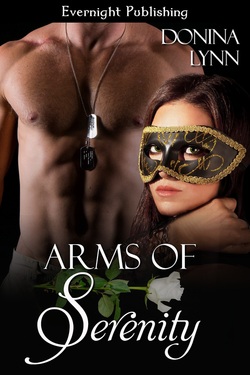 "Arms of Serenity is a sweet love story with a little kidnapping and covert ops that add a thrilling ingredient. The characters form an excellent foundation for the story to unfold. The storyline and characters are a solid foundation for the beginning of the Rock Services series. There are plenty of avenues to be explored by Donina Lynn in the wonderfully romantic series of heroes and the women who chose to love them"

"Strong, complex characters and an interesting plot, plenty of spicy romance and a great side-plot with a hint of ex-Army men, there’s an awful lot to like in this book."

Plagued by guilt, Nicholas Hollsten ended his military career in the Special Forces and returned home only to be forced into a life he never wanted. Nick found himself running his father’s company and making good on a promise to his team. Angry and frustrated with the direction his life was taking, he calms his thoughts by filling his evenings and bed with soft distractions. Until one woman captures his interest.

Rebecca Klayton thought she was happy in her small town, running her bakery and avoiding love. That emotion only meant heartache and being left exactly where you started—alone. Lesson learned. But, when the sexy stranger from their hot New Year’s Eve hook-up shows up at her counter, will she be able to ignore the temptation or will she find what she’s been missing in the Arms of Serenity?


Becca got as far as the curb outside before she heard Nick’s voice calling her name. She closed her eyes and groaned.

Why was he following her? Couldn’t he just leave her alone? She held up her hand to signal a taxi and hoped ignoring him would work until one stopped.

Becca heard him say her name again. Only this time he was too close to pretend that she didn’t hear him. She turned to find him holding the picture frame.

He just wanted to give her the frame. She sighed in relief and reached to take it from him.

He looked at her and put a smug smile on before saying, “You forgot these also.” He reached into his pant pocket and pulled out a glimpse of white lace material.

Becca gasped when she realized it was her forgotten panties. She got closer to put her hand out.

“Thank you for finding them.”

Nick pushed them back in his pocket. “How about that coffee?”

Becca took a step back and crossed her arms. “Are you seriously holding my underwear hostage until I go out on a date with you? Doesn’t that border on blackmail?”

Nick laughed. “Just using whatever means I have at my disposal to get you to say yes.”

Becca would laugh too if she wasn’t so angry. He was being an arrogant pushy ass. She glared at him. From his polished shoes, tailored pants, and what looked like a cashmere sweater, he was head to toe everything that Becca wasn’t. Why was he doing this? Damn him for coming after her. Damn him for wanting more when he could go back into the ballroom and have anyone of those models sitting at the table.

“You’re not my type.” She turned away from him and once again put her hand up in the air.

She stood there not wanting to look back. He hadn’t answered her, and Becca silently hoped that he had walked away. She was a mess. Her insides trembled at the conflicting emotions of anger and longing coursing through her. It would be so easy to give in and go with him.

“I’m going to have to argue that statement. I seem to remember being exactly your type last night as you shook and screamed in pleasure when I was buried deep inside of you.” He kissed the spot behind her ear, and she gasped in response. Shivers cascaded through her, and she leaned back melting into his body.

Dammit, Becca get some control! He’s just a rich guy who thinks he can get anything he wants.

Becca pulled away and turned around to face him as a taxi finally came to her rescue. Opening the door, she stood behind it to use as a barrier between them and took a breath to steady her trembling legs and gain some courage.

“Nick, last night was great, and thank you for not saying anything back in there.” She nodded her head in the direction of the hotel and continued. “But I’m just not interested.” She got in the cab, closed the door, and stared ahead as she gave the driver her destination. As the taxi pulled away, she could see him in the rearview mirror. For the second time in less than twenty-four hours, she left him just standing and staring after her.